This shop has been compensated by Collective Bias Inc. and it’s advertiser. All opinions are mine alone. #AwakenYourTastebuds #CollectiveBias 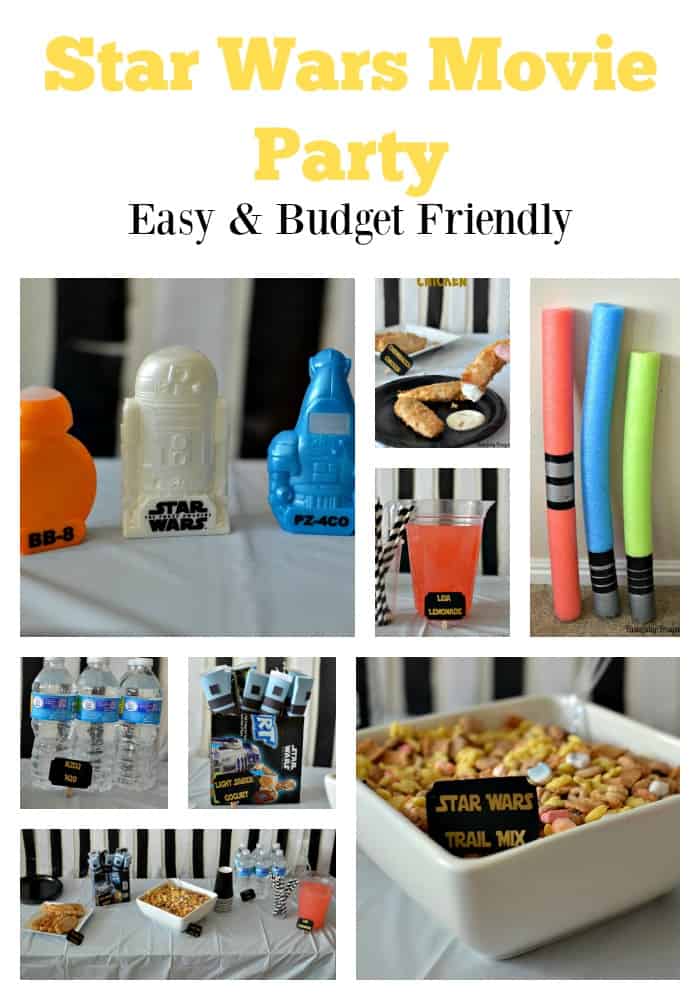 It’s finally here! The week we’ve been waiting for for over a year; the new Star Wars™ movie, The Force Awakens, opens this Friday. My husband and I have been Star Wars™ fans since we were kids and have passed the love on to our boys. They have about every Star Wars™ toy known to man and have dressed up as Darth Vader and a Storm Trooper for multiple Halloweens. So what better way to spend the weekend before the big release than watching all the Star Wars™ movies?! 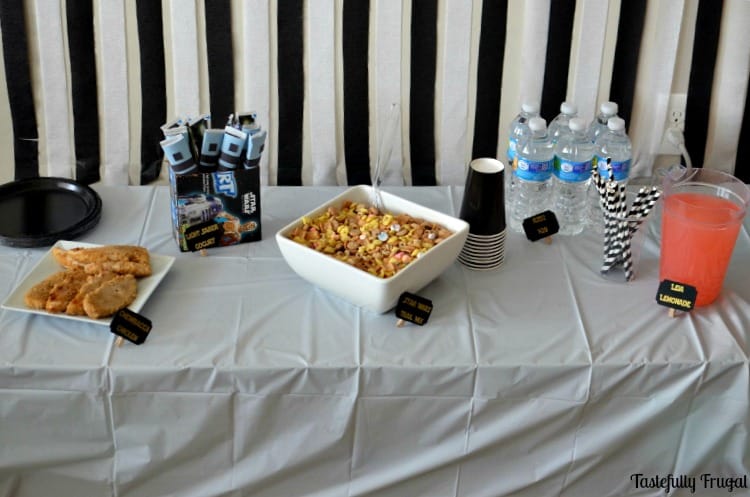 We invited a few friends over and spent all day Saturday watching movies and having light saber battles. As much as I’d like to say that the kids were the only one battling I have to admit the grownups joined in on the fun. The new Star Wars™ movie isn’t the only big event we have this month. With Christmas only two weeks away and all the planning and prep that goes into the holiday I didn’t have a lot of time to prep for a party too. 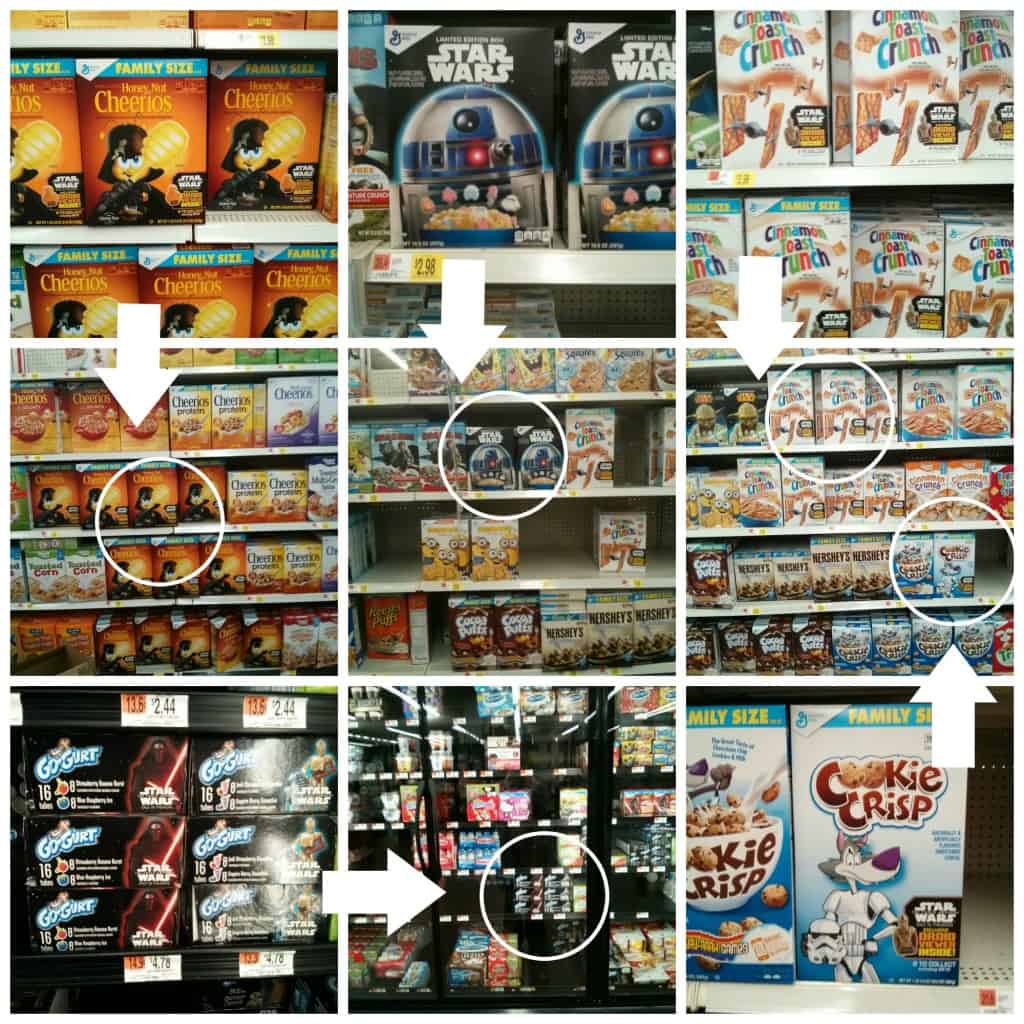 Thank goodness for the new  General Mills Star Wars™ Cereals. I picked up a few boxes and some Star Wars™ Go-Gurt® when I was picking up a few Christmas gifts at Walmart and was ready to go. Before I get started on the food I have to tell you about the awesome Star Wars viewers in specially marked boxes. They are six different viewers and the kids love them! I decided to hand these and Pool Noodle Light Sabers out as our party favors. When you were a kid did you ever ask you parents to buy a certain kind of cereal just so you could get the prize? Or have to buy 10 boxes of the same cereal so you could collect all the toys? Well I was the crazy mom who did that. Luckily, I only had to buy seven boxes (and we’ve eaten almost all the cereal so it’s a win-win). 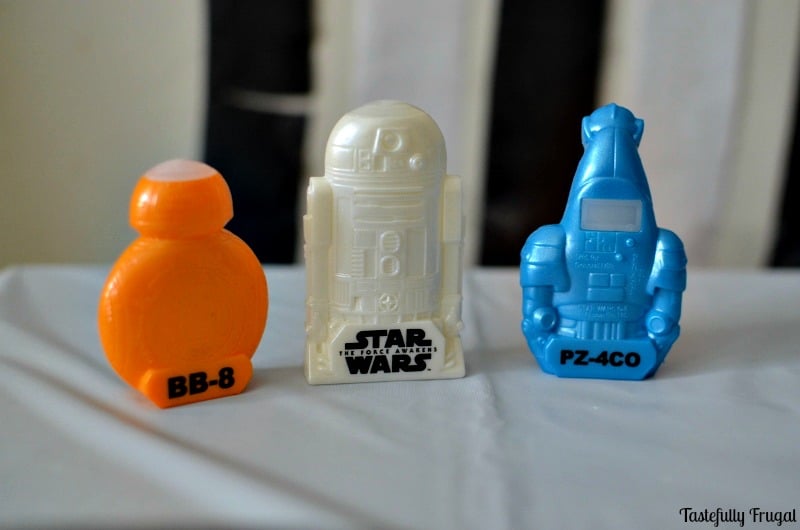 Let’s talk about the party food. I kept things simple with R2D2 H20 (bottled water), Sparkling Leia Lemonade, Star Wars™ Trail Mix, Light Saber Go-Gurts and Chewbacca Chicken. The Star Wars™ Trail Mix was the hit of the party and I had to make a second batch after two movies because we ate through the first batch (part of the reason why seven boxes of cereal are gone). 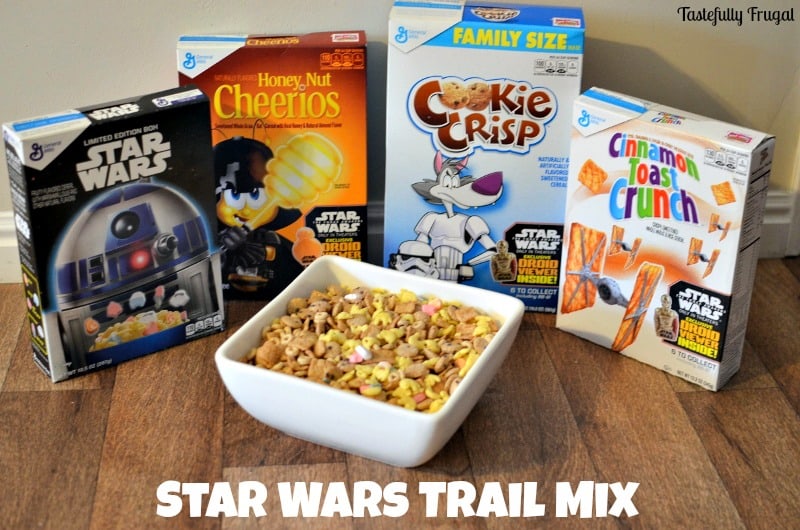 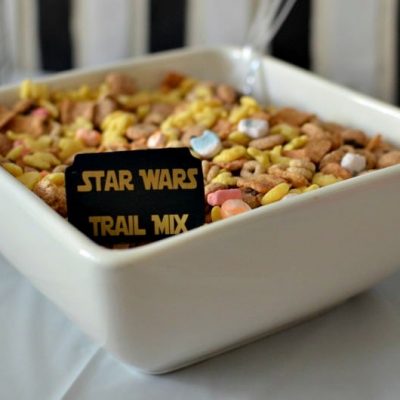 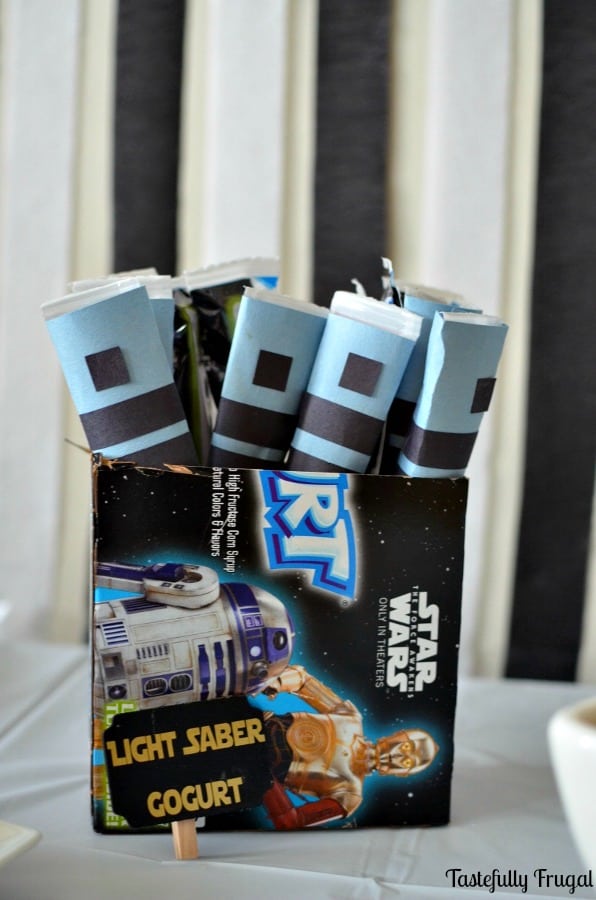 The kids all loved the Light Saber Go-Gurts. Maybe because we let them play with their food or maybe it’s because they glow in the dark! Watching five kids trying to fit into a quarter bathroom so they could see their light sabers glow was pretty funny. To make them you’ll need: 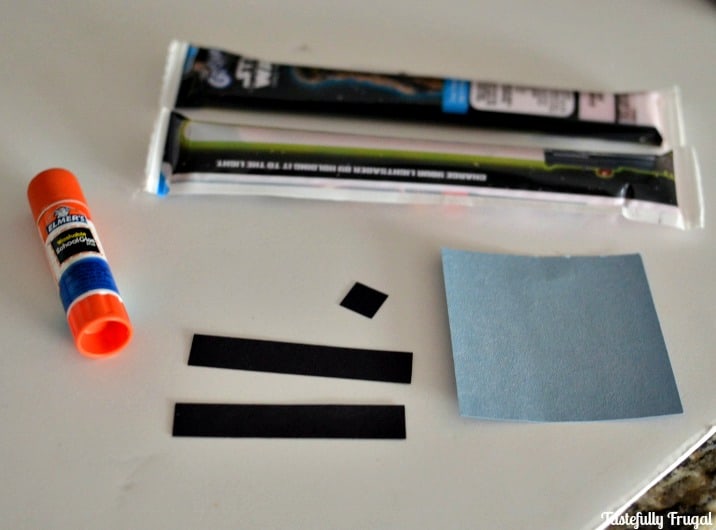 For each light saber cut a 3″x 3″ square out of grey paper. 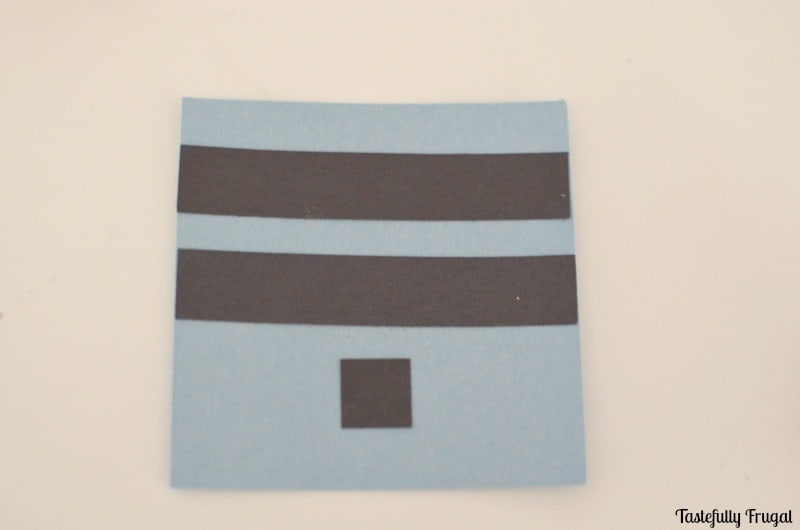 Glue the black strips and square to the grey paper.

Wrap the grey square around the bottom of the Go-Gurt and attach with glue (or tape). 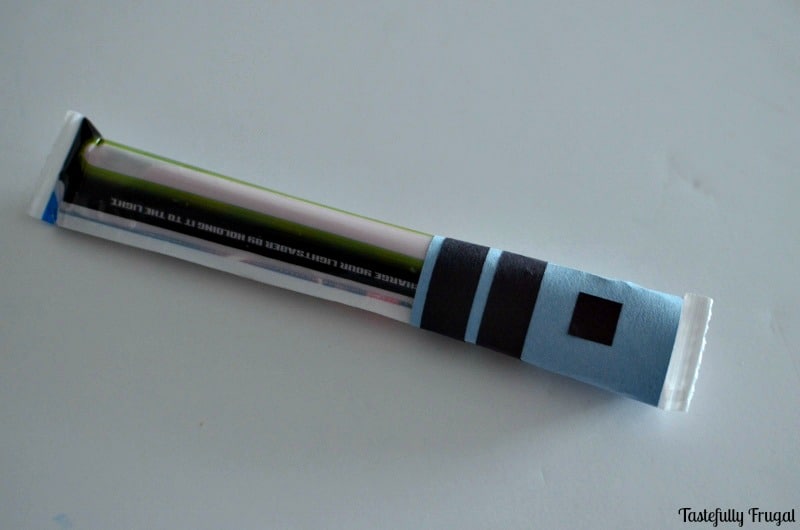 My favorite food was the Chewbacca Chicken. Not only was it easy to make but it also doubled as dinner so I didn’t have to cook everyone a full meal. They were easy to make too. 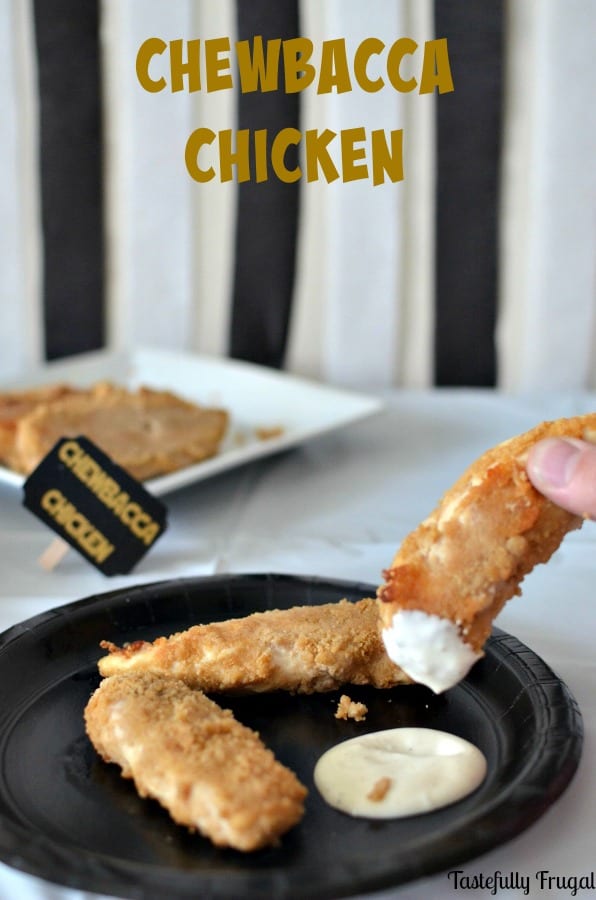 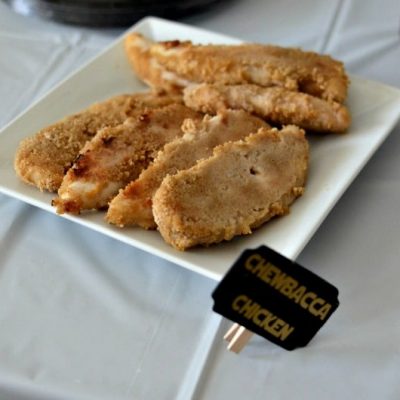 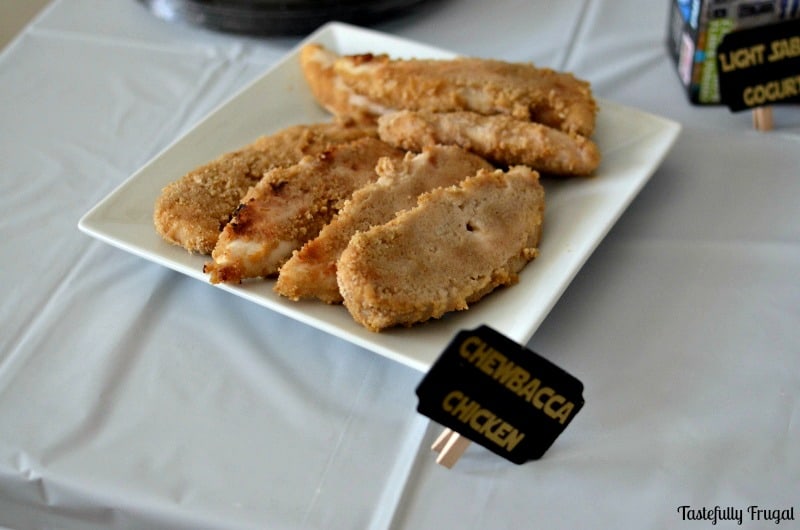 This was such a laid back and fun party and my favorite part was how easy it was for me to plan and prepare for. Are you excited for The Force Awakens to come out on Friday? Who is your favorite Star Wars™ character?

Looking for more great Star Wars™ inspired recipes and party ideas? Head on over to the Awaken Your Tastebuds site for lots more inspiration!