If you’ve got a Star Wars fan with a birthday coming up, or you’re planning a May the Fourth get together, you do not want to miss this post! 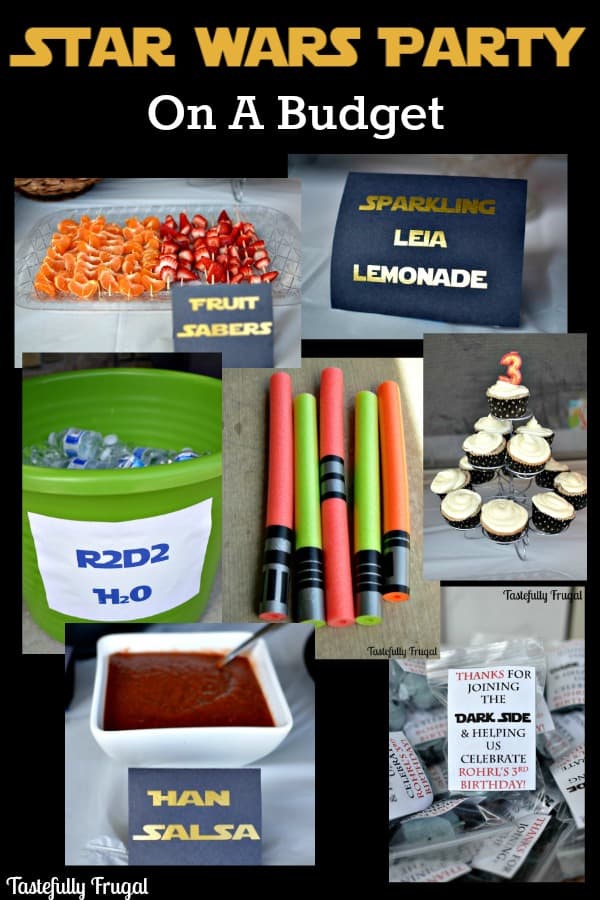 Rohrl, my now three year old, loves Star Wars. He loves EVERYTHING Star Wars! Anytime we watch a movie he always requests Star Wars, usually either Episode 1 (with Darth Maul) or episodes 4-6 (with Darth Vader). He was Darth Vader for Halloween last year and when we asked him what he wanted for his birthday and he said a Millennium Falcon and an AT-AT. That’s my boy, we knew for his birthday party a Star Wars theme was a must. 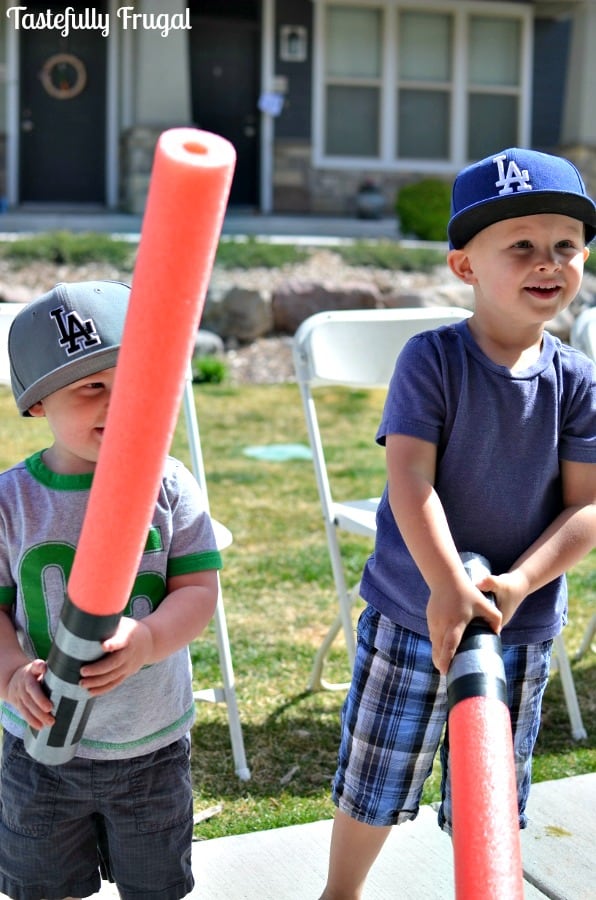 We were planning on just having a small family get together but Rohrl wanted his friends to come too; and I just can’t say no when he says “Pleeeeeaaaaasssssseee” so friends were invited too. I knew from the amount of invites we sent out we were going to have a big party so staying on budget was going to be key. My husband, Jeremy, and I talked and we set a budget of $75. For 50+ people I knew I had my work cut out for me.

We ordered his first birthday party invitations from Shutterfly so I went there first to order invitations. I found the cutest Darth Vader invitations but they were going to be $1.78 each and that would’ve taken up a huge amount of my budget. So instead I went to PicMonkey, designed my own, and had them printed at Walmart for $.19 each. 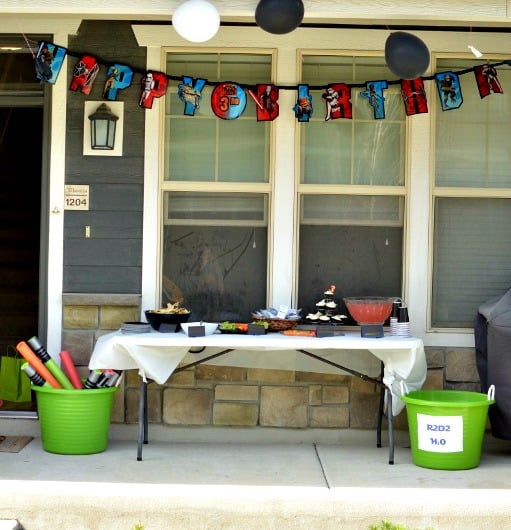 Next to plan the decorations. Rohrl is definitely a bigger fan of Darth Vader and Storm Troopers more than he is of Luke, Leia and Han so I decided to go with a black and white theme for the decor. Everything I didn’t already have I got from Dollar Tree. We went with white table cloth, black plates, cups and napkins and black and white balloons. We tied red baker’s twine to the balloons and hung them from the porch. Unfortunately it was a bit windy so some of the balloons popped before the party started. I was planning on making a Happy Birthday Banner but found this Star Wars Rebels banner at Zurcher’s for $5. It includes numbers 0-9 so we can use it for other birthdays too! After everything was said and done we spent $17 on decorations. 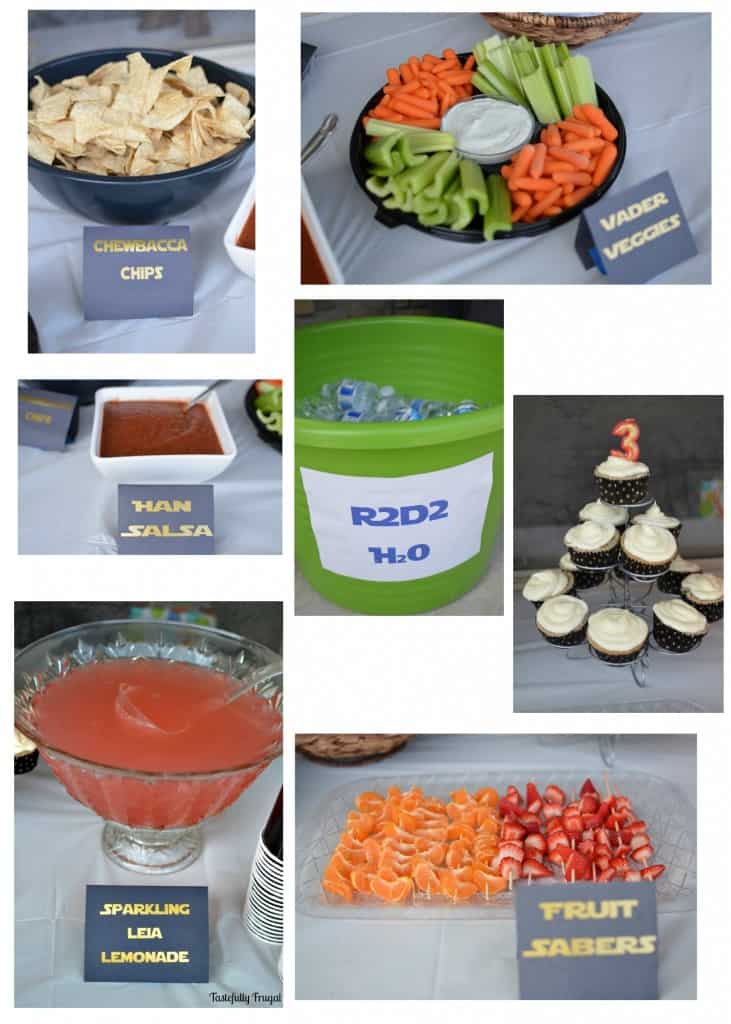 Now here comes my favorite part, the food. There are so many cute and fun ideas on Pinterest when it comes to party food for Star Wars parties. Since we were having so many people come I knew doing a meal was probably out of the question. Not only did I not want to spend the money for Han Burgers or Padme Pizza, but I also didn’t want to spend the time making them. We decided to go with easy finger foods. Chewbacca Chips and Han Salsa, Vader Veggies, Fruit Sabers, Clone Cupcakes, R2D2 H2O, and Sparkling Leia Lemonade. For the veggies I decided to make the dip and only buy vegetables we would eat if there were leftovers vs. buying a vegetable tray. I got the idea for Fruit Sabers from Pinterest and all the ones I saw used grapes. Grapes looked cute and are good but they aren’t in season right now so they are expensive. I chose to go with Cuties and Strawberries because they were on sale and everyone seemed to like them at the party. For the signs I used my Cameo to cut out the words in Star Jedi font and then stuck them on black construction paper. It was 1 am when I was finishing them up and I had a little trouble with getting the Clone Cupcakes to transfer so there wasn’t a sign for them. We spent a total of $38 for all the food. 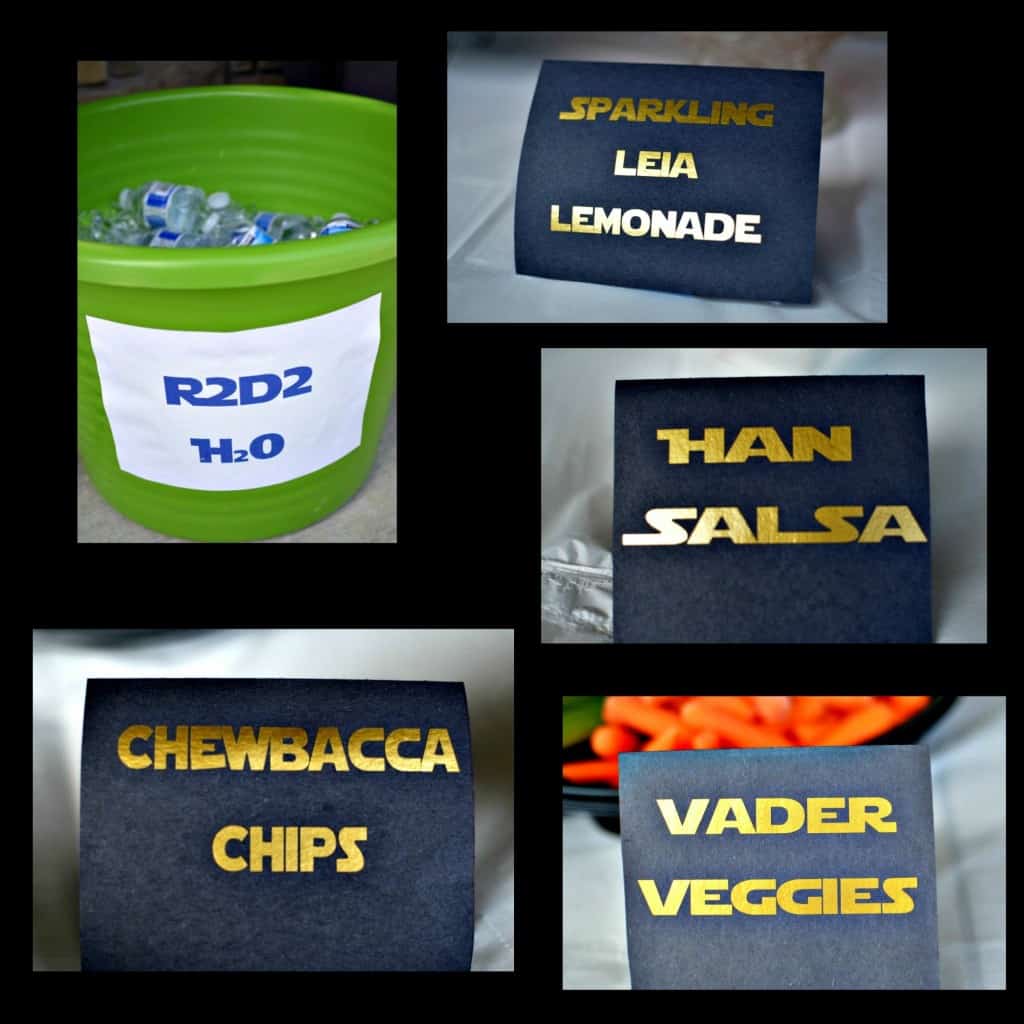 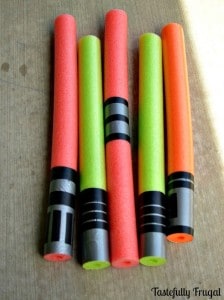 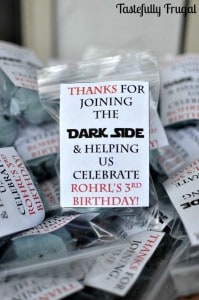 The party favors were the kids (and the grown ups) favorite part. I made Pool Noodle Light Sabers and Death Star Oreo Truffles. The kids had so much fun at the party battling each other, some of the dads joined in on the fun too! And they were all so excited when they found out they could keep the light sabers at the end of the party. The Death Star Truffles didn’t turn out as pretty as I had wanted but they were super yummy and everyone loved them; I think one of Rohrl’s cousins ate 10 of them! I made cards in Word and glued them to the front of jewelry ziplock bags that I had left over from Valentine’s Day.  I got the pool noodles at Dollar Tree and spent $13 making them (I factored in the Oreo Truffles in to the food budget). 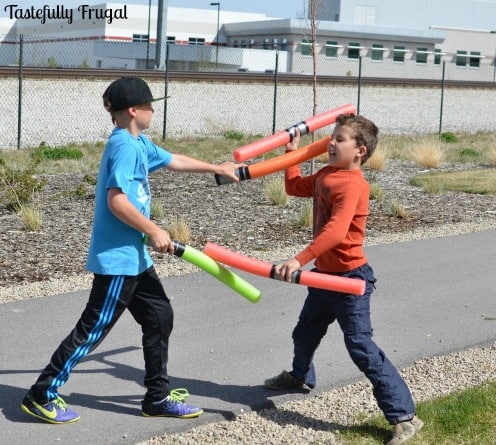 Everyone had so much fun at the party and we stayed under budget too! We had just under 50 people show up and spent a total of $71. Not too shabby I think. And most importantly the birthday boy had such a good time! He was sad to see all his friends leave but he took a good long nap and woke up happy as could be.

Are you a big Star Wars fan? Who is your favorite character?